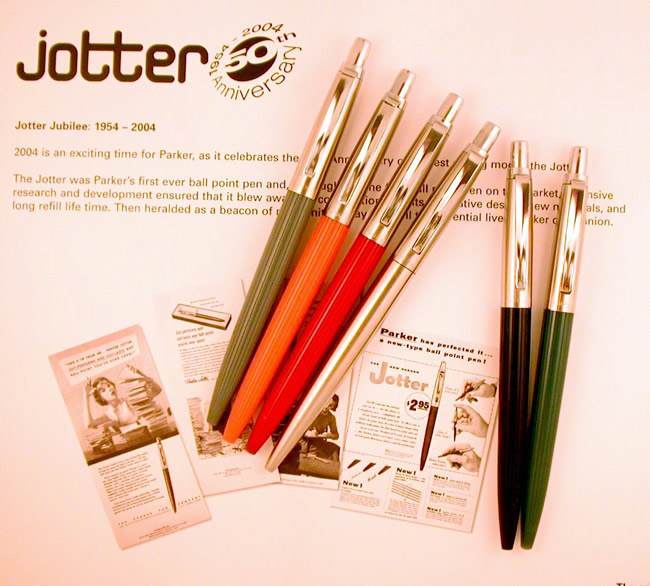 In 1946 Kenneth Parker wrote a letter to Time magazine stating that he resented the notion that the Parker Pen Co. was napping because it didn’t have a product in the exploding ballpoint pen market. Unknown was the fact that Parker had been researching and developing ballpoint pens since the 1940s.

“As long as two years ago, our management realized-between naps-that we could make a quick, fast bulge in sales and profits by marketing a ball pen.” Kenneth Parker predicted with a short statement…”If and when Parker brings out a ball pen, it won’t resemble anything now on the market.”

After waiting almost nine years to enter the ballpoint market Parker put the Jotter into production in just 90 days. This project was the responsibility of Daniel Parker and on December 22, 1953 “Operation Scramble” was launched. This was a rush to production and the first Jotters emerged from Janesville on January 5, 1954, and was priced at $2.95.

This was the start of the decline of the fountain pen and the era of the ballpoint. In 1953 the value of ballpoint sales finally overtook the sales of fountain pens. Parker’s late entry into the ball pen market proved to be a brilliant move, particularly because of Jotter’s design innovation, quality, and price point.

One of the most important designs was the rotating refill. With each click, the Jotter’s ball would rotate 90 degrees, which means it would wear evenly,” he said. “All of the other ball pens were wearing unevenly, and after three or four weeks, they didn’t work.” This feature exists to this day. There were many other improvements in the design of the Jotter over the years, most notably the sintered steel ball which had a textured surface and allowed for a better grip on paper and better ink flow and delivery. The result was the introduction of the “T- Ball” Jotter in June 1957 and Parker lowered the retail price to $1.95.

To mark this 50th anniversary, Parker has launched the Jotter Jubilee, a special edition pen that will only be produced through November.

The Jotter Jubilee is available in two finishes and two colors. It follows the patterns and designs of the 1950s, and the trademark Parker clip has lost its feathers. The top of the plunger is engraved with “50.” The collection features the fun and colorful Jotter Gel 50s collection in five 50s inspired color finishes; the stylish Jotter Special Edition range with ball blasted maze or dots patterns, and the sophisticated Jotter Premier Edition model with its silver filigree-sleeved barrel. check out for Acrylic Color.

The design inspiration of all the new pens has been taken from the 1950 era – the decade when design and technology were booming, and when the Jotter was born – and re-interprets the brand for the 21st century. The Maze pattern references the square and abstract graphics which were found on virtually everything in the print media of the 1950s. The Dots pattern is also a timely theme, taken from the halftone screen printing technique used at that time for the growing popular comics and illustrated press. Similar to the vintage Parker 45 Harlequin pattern, the effect is created by sandblasting which leaves a matte and gloss finish.

The third, and most highly anticipated new development from Parker for the Jotter Jubilee, however, is the stunning new Premier Edition model – which will only be available at the end of this year.

This is a pen for design aficionados and collectors. Based on the original Jotter Filigree – a pen that was sold almost exclusively at the 1959 New York World’s Fair – the Jotter Premier Edition features a sterling silver cap, hallmarked as a guarantee of quality, and a sterling silver button and filigree sleeve.

Available in two finishes – licorice black on silver, and saffron yellow on silver – the body is ornamented with a remarkable effect, achieved by cutting a pattern into the sterling silver sleeve, and then molding the colored barrel with the sleeve. This complicated technique gives a beautiful result that again references the square and abstract graphics so popular in the 1950s, making the Premier Edition pen and its shiny black metallic gift box the last word in contemporary chic.

The Jotter was Parker’s first-ever ballpoint pen, although not the first ballpoint pen on the market, extensive research and development meant that when Parker launched the Jotter, it blew away the competition with its innovative design, new materials, and long refill lifetime. Then heralded as a beacon of modernity, today it is still the essential lively Parker companion.

The Jotter remains today as a worldwide symbol of Parker design and success more than any other product in its history. The Jotter is accessible and affordable, yet unsurpassed in its quality, and over the course of the last half-century, more than 750 million have been sold worldwide.