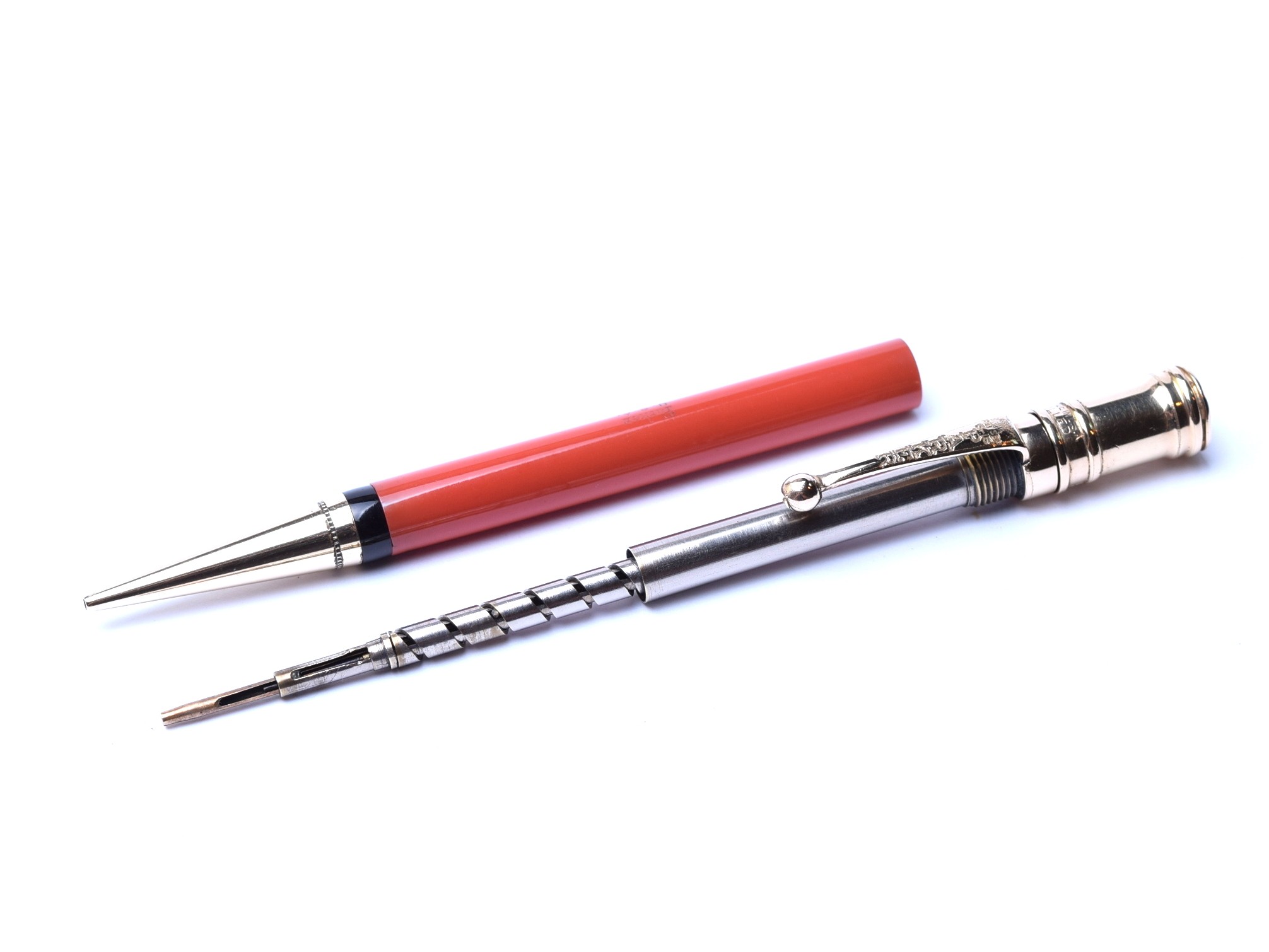 This article is a brief summary related to the pencil Duofold introduced by Parker between 1923 and 1928, the so-called Flat Top. To be described here are the diverse sizes, with the date of introduction in the market, the type of materials used in manufacturing, and the colors in which the pencils were offered. In subsequent articles, the Pre Duofold and the Post Duofold Flat Top pencils will be described.

The company Parker was founded in 1888 and began by making fountain pens exclusively, however, around 1918- 1920 it added the production of pencils in different sizes molded in bronze, silver, gold, and other metal combinations. These first pencils are very similar to the future pencil Duofold, but they are not imprinted with the name Duofold on the pencil, nor are so designated in catalogs or adds of the period.

In fact, the Duofold name appeared for the first time on a fountain pen produced by Parker in 1921 at the insistence of a salesman, Lewis Tebbel of Washington State. For reasons undetermined, George Parker was initially against the manufacture of this pen and ordered to stop production, nevertheless, the Duofold was the pen that saved Parker from bankruptcy. This first Duofold fountain pen is of a color called “maroon” by Parker, but now it is known as red-orange.

The first pencil with the Duofold name

The first pencil with the Duofold name was presented to the public on February 1st, 1923 and it was geared as a very appropriate graduation gift for University students, the advertisement offered the pencil as a Duette with the matching fountain pen. This 1923 pencil measures 11,8 centimeters in length, the body is in bronze finished with red-orange enamel, although a few are in black enamel; the cap is of metal electroplated in gold and is imprinted with the Duofold name; the clip is welded to the cap, and its shape resembles a spoon. The mechanism is of rotation, and one must take care when removing the mechanism because it has a certain type of coils and hooks that not knowing how they are intended to work can produce irreparable damage to the mechanism.

Three of the first Duofold pencils from my collection are shown in the photo.

Second pencil Duofold and the first made of Ebonite

This pencil was introduced by Parker in 1924 and it was made in red or black ebonite like the pens; it is larger in size than the pencil of the previous year, actually is of the same size as the next to be produced pencils that would be called “senior”. The imprint on the body says Duofold – Parker “Big Bro” Pencil- Janesville, Wisconsin USA. The cap is finished with three rings, two with sawed marks while the third is smooth; the clip is loose and finished in a ball, a feature to become standard for all later models. The mechanism is also of rotation but with improvements to facilitate repairs. I have shown these pencils to several collectors who remain surprised since they did not think that the pencils were genuine until I show them the vintage ad with a photo of the pencil. This pencil must have been in production for a short period of time because there are not many around; in my collection, I have eleven, nine of red ebonite and two of the black ebonite.

Caps of the pencil Duofold

The caps of the Duofold pencils have different shapes, due surely to variations introduced in the place of their production because Parker had factories in Canada and England in addition to the USA plant in Janesville-Wisconsin. Five different caps are in existence: the first Duofold pencil in bronze with the spoon-shaped clip welded to the cap; the subsequent Duofold larger pencil in ebonite with three rings in the cap and loose clip ended in a ball; and three others, one with long cap and a loose clip that keeps in place by the pressure of the body and the cap, another one also with the long cap but bearing a grove where the clip is inserted, and, finally still another with short cap and loose clip.

It should be noticed that the cap of the feminine Lady model does not have a clip but instead is topped by a ring for the passage of a silk cord that would allow carrying the pencil like a necklace or as a bracelet.

The pencil Duofold Flat Top was offered in three sizes

All these pencils also have matching pens in similar colors, unfortunately, the colors of the pens have deteriorated as a result of the chemical influence of the ink contained in their rubber sacs.

In May of 1925, Parker began to send to his salesmen a new line of pens and pencils of the Lady model in six pastel colors: magenta, gray/beige (the rarest one to find), violet, green apple, coral, and blue Naples. These pastels colors were also manufactured in a moire pattern. And because these pastel colors were only made for ladies, its advertisement was limited to women’s magazines.

Pencil and pens of the so call Duofold Quality (D.Q.)

Parker embarked briefly in 1924 in a production line of pens and pencils of quality similar to the Duofold line but of lesser price for use by children and young students in high schools (in fact, Parker was finishing the leftover black ebonite of the previous series already discontinued). These are the Parkers D.Q. (Duofold Quality), only in black, with a design of horizontal lines and the name of the company prominently imprinted in the body.

Note: All the pencils displayed are from the author’s collection.

Jimmie Cockburn was born in Lima, Peru, studied Medicine in Spain, and received the Extraordinary Prize of the Real Academy of Medicine for his doctoral thesis. He continued medical studies in Paris, France, and in the U.S.A. in the specialty of Anatomic Pathology and Laboratory Medicine receiving certification by the corresponding Boards of these specialties. He practiced Pathology covering three hospitals in the Southern Maryland area. He has retired since and now devotes part of his time to the collection of pens and pencils. His new specialty now is mechanical pencils, with a collection of several hundred units. You can visit his website at http://www.jimmiecockburn.com

This article was originally published in Spanish in La Gaceta del Club de La Escritura in January 2002. Check out Actionable acrylic paint tips you should know. 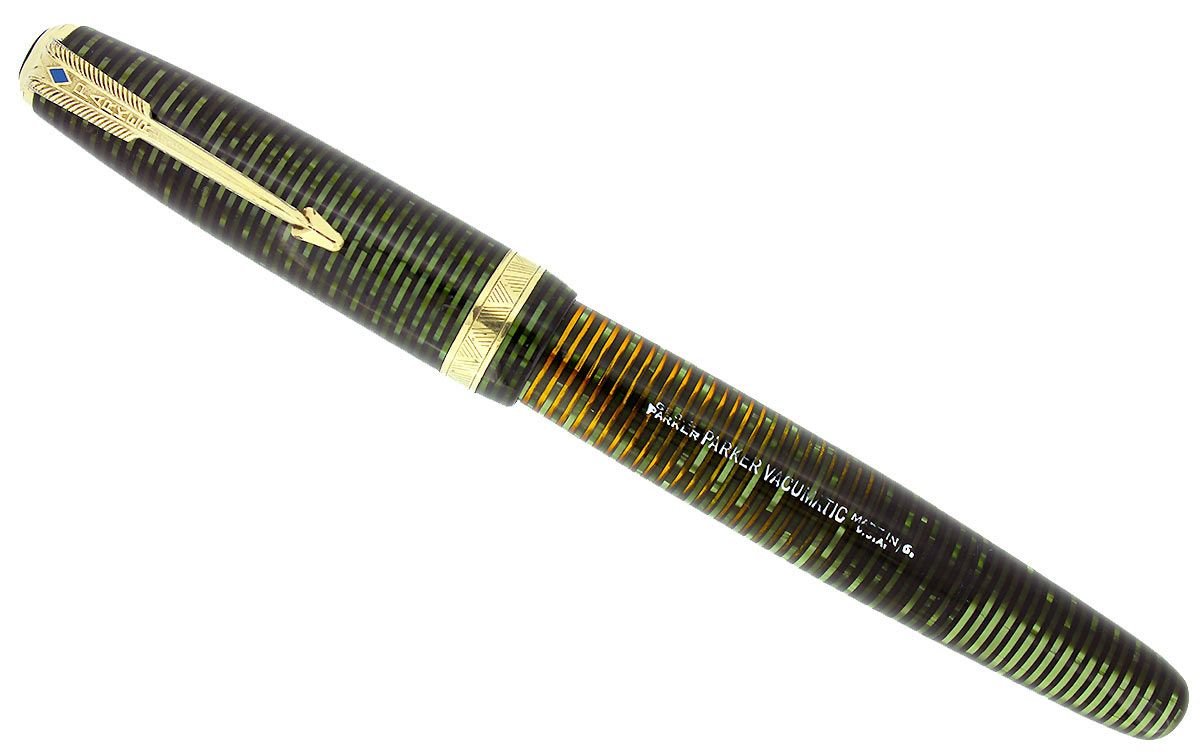 The Many Hues of Parker: In August 1932, Parker announced the next generation in fountain pens, the Golden Arrow. The pens actually went into production in 1933; the name underwent rapid changes to Vacuum Filler and then to Vacumatic, and a legend was born. The Vacumatic line remained in Parker’s stable until about 1948; as best I can tell, Parker ceased using the Blue Diamond, which indicated a lifetime warranty, and ended production of the Vacumatic at the same time. Over the lifetime of the Vacumatic, a broad array of colors was available; but not all of the colors were offered at the same time. When the Vacumatic went on the market in 1933, the Standard line was offered in black, Burgundy Pearl, and Silver Pearl, while the Junior line was offered in black, marbled Grey or Burgundy, and Crystal. A the end, Vacumatics were available in Emerald Green Pearl, Azure Blue Pearl, Golden Pearl, and Silver Pearl. The information here is as accurate as possible, but you should not take it as absolutely authoritative.

This article shows the striped “Pearl” colors, then the Junior colors (“Golden Web,” marbled, and Shadow Wave), and finally the black versions. Check out for Acrylic paint tips for beginners